To do To see

The 122-km long Isère Valley V63 Véloroute, between Grenoble and Saint Hilaire du Rosier, is a panoramic cycle path connecting the mountains and plains of the Chartreuse, Belledonne and Vercors regions.
© David Boudin

This cycle route in the heart of the Alps of Dauphiné stretches for 122 km across Isère, providing an alternative to the ViaRhôna. Its extreme end is at Aix-les-Bains in Savoie and it joins up with the Rhône section of the ViaRhôna in the department of Drôme.

From Grenoble (the section before Grenoble has yet to be completed), the Véloroute follows the winding River Isère. After about 15 km, the path heads south along the western Vercors barrier, straight into the heart of the Pays de la Noix (walnut country). At Vinay, the Grand Séchoir - Maison du Pays de la Noix (walnut drying cellar and museum) recalls the history of the nut’s cultivation and offers the chance to purchase a whole range of sweet and savoury delights.

Carved into the rock

After Vinay, about 43 to 45 km further on, the road through the Nan gorges enters the Vercors, offering an impressive architecture of natural features. Likewise for the  Bourne gorges which you’ll reach after crossing the village of Pont en Royans with its curiously suspended houses.

You can cool off at the  Marandan watersports centre in Saint-Romans, as the Véloroute passes close by. Unless you prefer the Choranche cave, just after Pont en Royans, where the temperature remains at a constant 10°C all year round!

Visit the Carmes Convent at Beauvoir en Royans, a medieval fortified town dating from the 14th century. It retraces the fascinating history of the Dauphins of France. Outside, the kitchen garden and orchard are home to over 300 ancient varieties of fruits, vegetables and herbs.

So what is a veloroute?

A Véloroute is medium or long-distance, marked and secured cycling itinerary that’s uninterrupted, even through the towns. It has no difficult slopes and remains wherever possible on dedicated cycle paths and quiet secondary roads. 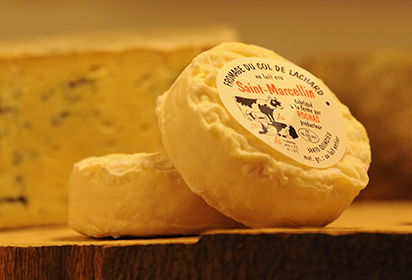 Essential culinary delights of the Dauphiné region. Don’t forget to try them!

→ Find out more about Saint-Marcellin